At bevPLUS, (if you haven't noticed yet) we LOVE our beer. Beer science, beer knowledge, beer festivals - you name it!

So, when Chris and Milena Perrine from Craftbeering contacted us to chat about the Oktoberfest and cooking with beer, well of course we had to get involved. Check out their knowledge below on cooking with craft beer: Oktoberfest style!

Drooling alert: The meals & beer style choices below may cause excessive drooling, scroll at your own risk.

To the German people beer is not only the national drink - it is a part of their culture and a very important ingredient of many traditional dishes. Nowhere is this more true than in Bavaria - the land of Oktoberfest.

Oktoberfest started as a folkfest and an agricultural show to celebrate the royal wedding of the Bavarian crown prince Ludwig to princess Therese von Sachsen-Hildburghausen in 1810. It was such a successful festival that it continued every year after that.

Beer was first served in 1818 when the first stands to sell it were set up on the grounds. The brews offered back then were dark lagers, not too different from today’s dunkel lagers, known as Märzenbier (Märzen for short).

The name was tied to the fact that they were brewed in March, then lagered in cool cellars until ready to consume in fall. Over time advances in kilning technology led to the use of paler malts and the lagers became lighter and lighter - from vibrant amber to today’s deep gold festbier.

To this day traditional dishes remain central to the festivities and many of the most famous Oktoberfest eats feature German beer as an indispensable ingredient.

What it is: Obatzda is a delicious cold beer cheese spread made with several soft cheeses, spices, onion and a flavorful German beer. The name comes from a word in Bavarian dialect which means ‘mixed’. 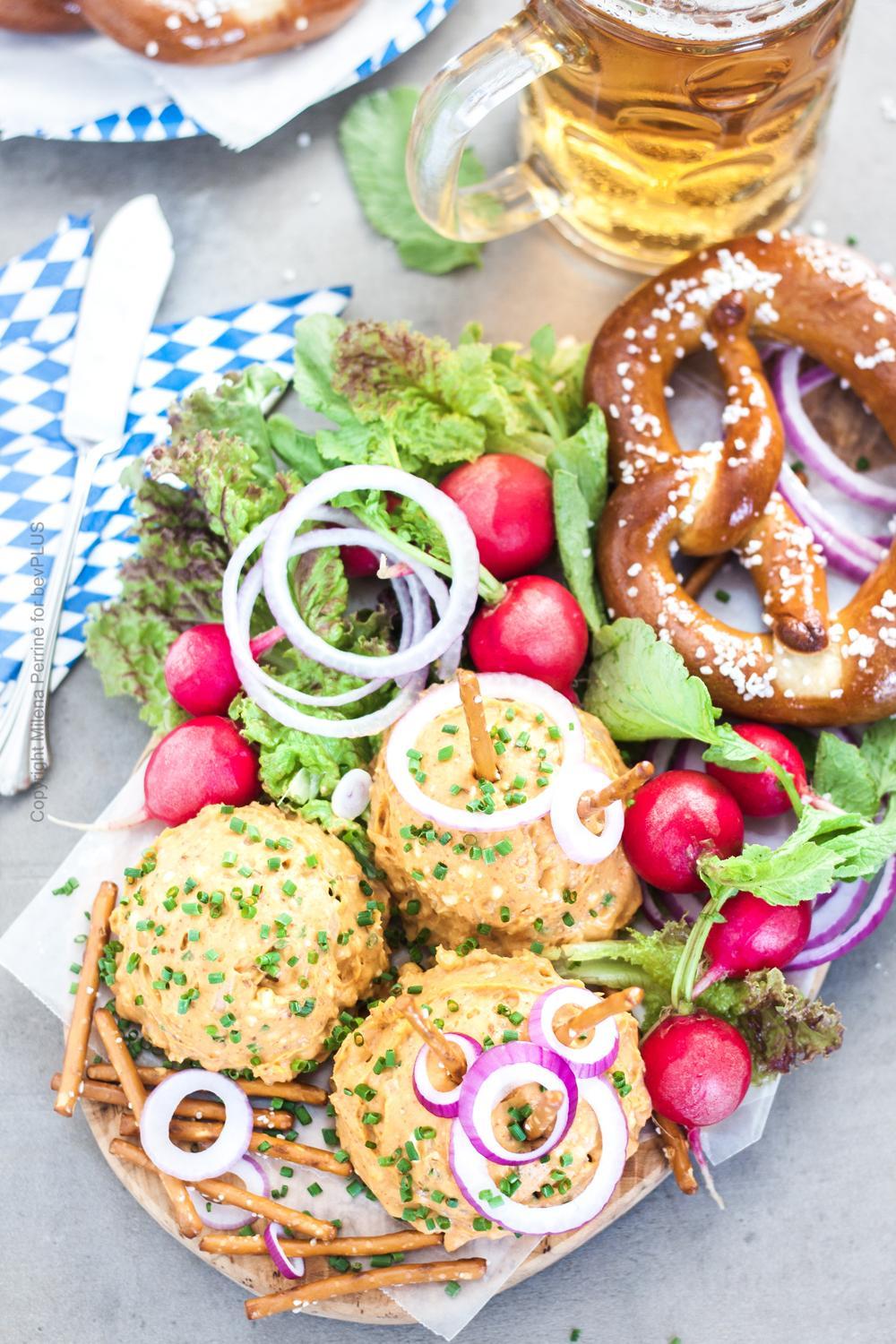 Background: Obatzda’s history is intertwined with the emergence of the beer garden culture in Germany. In the beginning of the 20th century, just as beer gardens were becoming more and more popular across the country, soft cheeses like Camembert and Romadur began to be produced in Bavaria but in the absence of refrigeration they became overripe fast. Resourceful beer garden proprietors in the region quickly came up with the idea of mixing the ripe cheeses with butter, spices and beer to make them edible again. Today Obatzda is also an iconic Oktoberfest and beer hall appetizer.

Traditionally Obatzda is made with either Hefeweizen or Franconian style dunkel lager (as opposed to the often chocolaty tasting Munich dunkel). Obatzda recipe.

What it is: Known as Schweinshaxe, roasted pork knuckles are symbolic to Bavarian beer halls where patrons enjoy them along with potato dumplings and a lot of beer gravy.

Background: In the past when a home-fattened pig was slaughtered it was important to process all the parts of the animal, nothing went to waste. The pork knuckle with beer gravy has been a typical regional Bavarian dish since the late 19th century and has grown in popularity to become a symbol of local cuisine. It is one of the key specialties served at Oktoberfest where nearly 80,000 roasted pork hocks are consumed annually by patrons. If you make it to the festival in the future, check out the Schutzen tent which boasts the best pork specialties on the Wiesn.

Dunkel lager, Märzen, bock, doppelbock or schwarzbier work best in this dish as they contribute malty and sweet notes to the gravy. Frequently the pork knuckles are first simmered in beer and then the liquid is used to make the gravy along with drippings from the roast hocks. German Roasted Pork Knuckles recipe.

What it is: Roasted pork shoulder, often with the skin on which becomes beautifully crisp. Traditionally prepared with colorful root vegetables and served with a beer gravy. 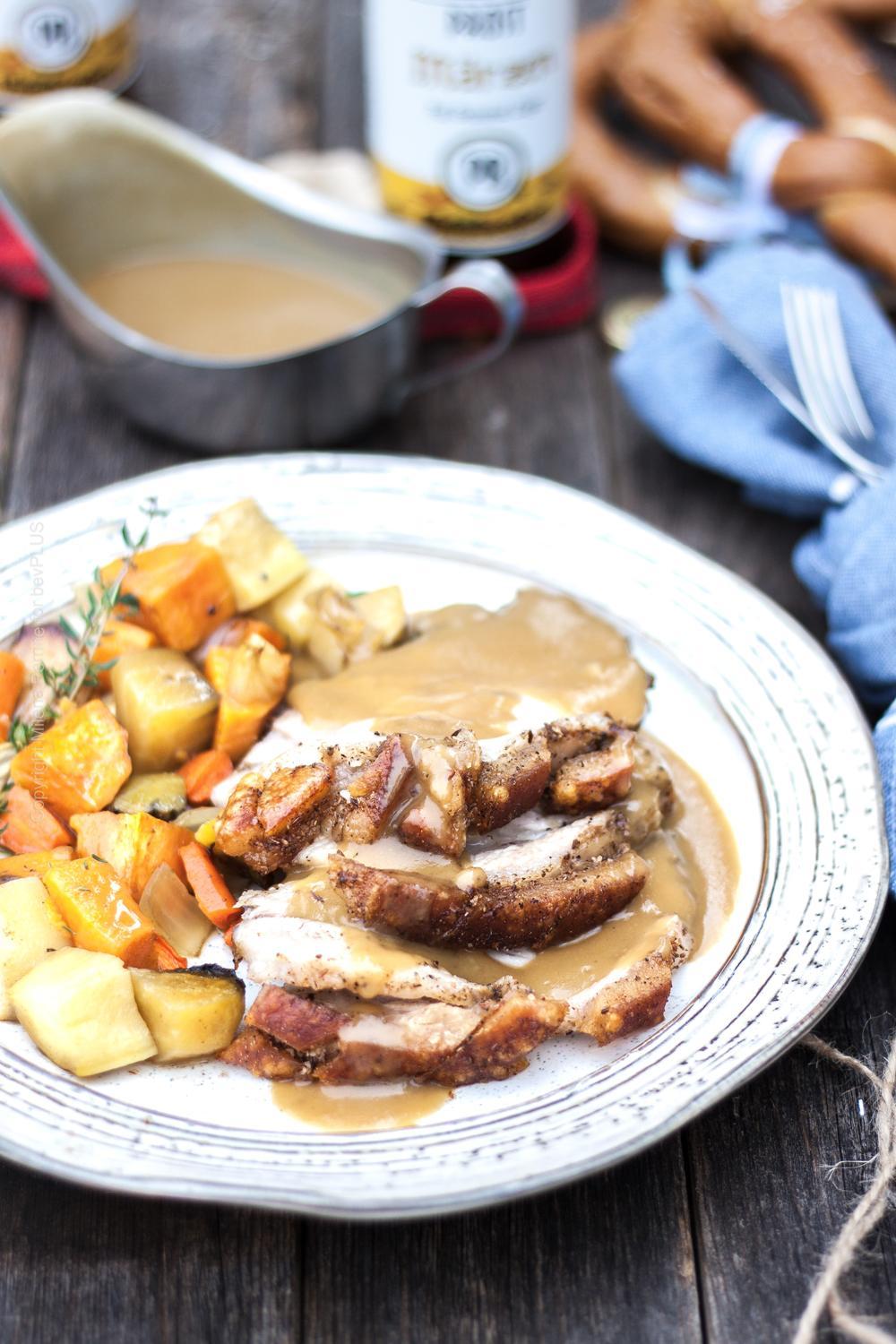 Background: In the past, when the price of pork was high, the traditional roast pork was a delicacy reserved for the wealthy and was enjoyed at the tables of royalty and nobility. Over time it found its way to simple home cooking where the meat from the pig’s shoulder (preferably with the
rind) was slow-roasted to perfection and a rich sauce was created by adding beer to the drippings. Today it is considered a traditional Bavarian dish and enjoys a prominent status at the Oktoberfest food tents.

What it is: Stewed beef bits with paprika and German beer, often prepared with potatoes. Goulash is enjoyed during Oktoberfest in both soup and entree variants. It is also a popular offering in beer gardens and beer halls. 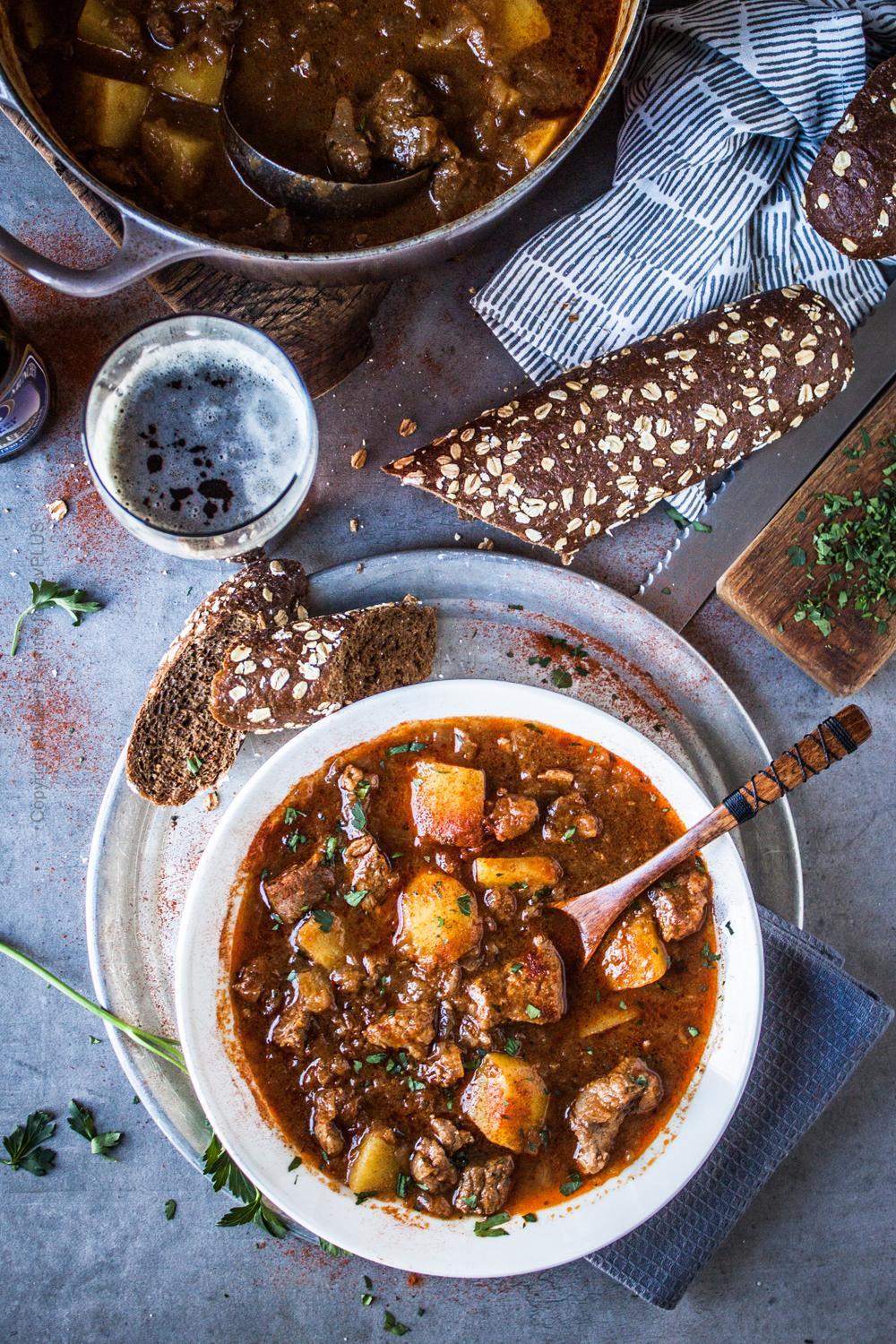 Background: Goulash came to Germany by way of Austro-Hungary. Its origins are in the nomadic way of life of the ancient Magyars (ancestors of the Hungarians). Hungarian sweet paprika was always the key ingredient added to any kind of meat. Contemporary German goulash is made with flavorful dark German lager and beef.

What it is: Fresh apple rings dipped in fragrant beer batter and fried to golden perfection. Often served with walnut ice-cream. 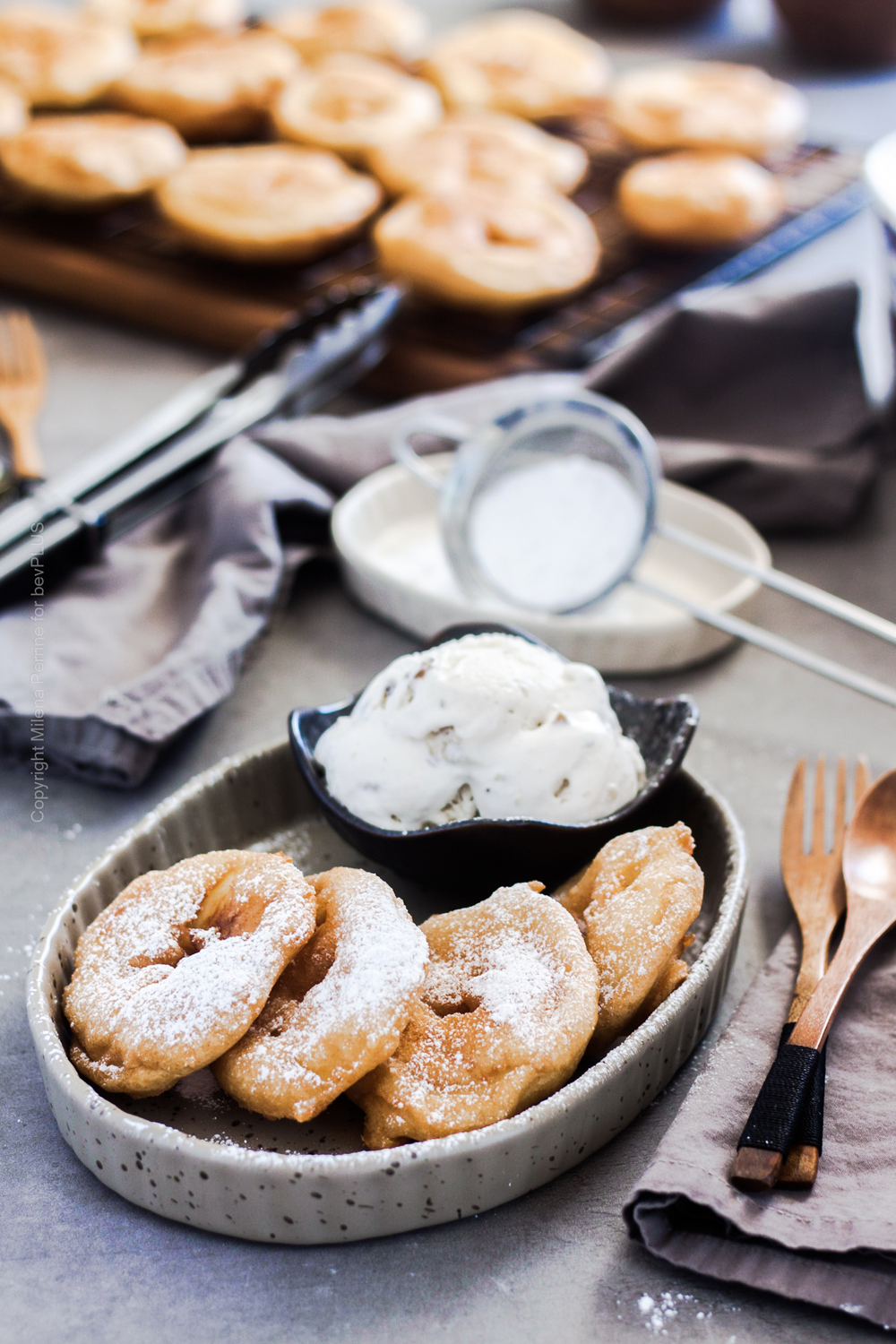 Background: Apple fritters are known as the ‘sweet snack of the South’ and hail from the region of Baden-Württemberg. Because apples are in season at about the same time that Oktoberfest takes place, these little numbers have made their way to the festival and are one of the most
popular desserts offered.

Hefeweizen ale is by far the best beer to use here. The signature banana-clove esters of the yeast with which it is fermented are extremely complementary to the dessert and the potent effervescence or the style contributes to the airy batter. Apple Fritters recipe.

Author’s Info: Chris and Milena Perrine are behind the lifestyle blog Craft Beering where their focus is on cooking with beer , craft beer cocktails and general cooking tips and techniques. Chris is an executive chef and home brewer who spent three years of his early career at a German beer hall, Kaltenberg Castle Royal Bavarian Brewhouse. Milena is a former finance professional, an avid home cook and a traveller.